A newly announced partnership between BetMGM and the Washington Nationals brings BetMGM Sportsbook to Nationals Park next season.

The agreement makes BetMGM the official betting partner of the Washington baseball franchise. With the partnership comes plans for BetMGM to launch both a retail sportsbook and mobile sports betting app in the vicinity of Nationals Park.

The BetMGM retail sportsbook will take over the space currently occupied by the “Center Field Social” venue just outside of the ballpark. This sportsbook won’t be accessible to fans attending Nationals games, as the space sits just outside the center field gate at Nationals Park.

Attending fans will be able to place bets on the BetMGM mobile app, however. Once downloaded, the mobile app can be accessed in and around Nationals Park, up to a two-block radius.

BetMGM and the Nationals expect to open the land-based sportsbook at the ballpark by summer. Once it launches, the sportsbook will take bets year-round.

BetMGM joins William Hill and GambetDC in the Washington D.C. sports betting market. The BetMGM launch places it in a similar category to William Hill, which offers a land-based sportsbook at Capital One Arena (home of the NBA’s Washington Wizards and the NHL’s Washington Capitals) as well as a mobile app accessible in and around the arena.

FanDuel Sportsbook expects to launch in the nation’s capital using a similar model. FanDuel and D.C. United have a partnership in place that will eventually launch a retail sportsbook and mobile app at Audi Field, home of the Major League Soccer franchise. 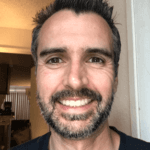 Geoff Fisk is a San Diego-based freelance writer, specializing in the poker and gambling industries. He’s written for numerous platforms and has traveled the globe as a live poker tournament reporter. Geoff’s interests include the legal online poker industry in the U.S. and abroad.
Copyright © 2022 . All rights reserved. About Us / Contact | Privacy Policy | VA Sports Betting Revenue